In the blog this week we’re brightening up this very unpredictable weather with some colour! Bristol is renowned for the postcard-ready colourful houses that line the hills around Totterdown and Hotwells. In classic Bristolian style, this bright paletted trend was resident led – with home owners beginning to paint their homes all the colours of the rainbow back in the 1960s! We aren’t, of course, the only place to have a splattering of rainbow buildings across the city centre and we’re looking at the other places around the world that are injecting colour into their streets!

One of the reasons we love these colourful rows of houses is because it’s playful and uplifting, pulling away from mundane, often grey residential plots. With echoes of lego pieces or packets of sweets – the inner child is let loose in these beautiful colourful areas!

Starting with the capital of one of the most sophisticated Scandinavian countries, colourful terraced buildings might not be the first thing you expect to see in Copenhagen, Denmark. The bright street fronts are a bold contrast to the typically grey Danish weather, especially along the waterfront of Nyhaven. Originally this area was the red-light district of the city but was rebranded and given a lick of paint in the 1960s!

Our next colourful place is a sea of beautiful blue hues in Jodhpur, India. One glance at an aerial photograph of this place will make you understand the nickname “The Blue City” as the vast spread of cobalt buildings stand out starkly against the desert backdrop. Historically, a  blue pigment coating on a house used to indicate that a Brahmin lived there, but gradually the color became a badge of identity for non-Brahmins, too. It’s also said to have insect-repelling abilities alongside it’s religious properties!

Another place that chose to go blue, is Chefchaouen in Morocco – again, an unexpected hue for a settlement in North Africa. Painting the walls blue likely happened in the 15th century, shortly after the city was founded although there is speculation around why it happened! Some say the blues are to represent water and to represent the Mediterranean sea, others suggest the blue to keep the residents cool or perhaps to ward off mosquitos!

Another of our favourite multicoloured neighbourhoods can be found in the La Boca barrio of Buenos Aires in Argentina. Similarly to Bristol – the colourful houses have created space for activity and when wandering down these bright streets you’ll be met with artists, street performers and musicians!

Check out some of these stunning places here; 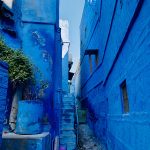 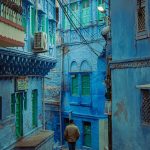 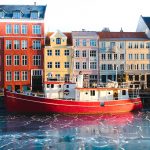 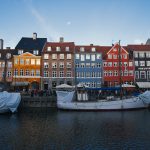 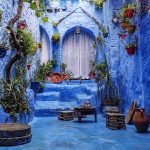 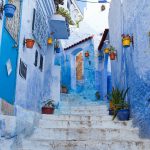 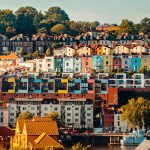 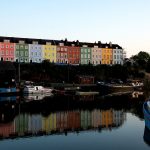