“Wylde have been great to work with. I have personally spent time with the team selecting the look and feel of our offices with a layout that give the right brand signals. Tracey organised for us to visit a number of other offices to see what is possible, and we spent time visiting furniture showrooms, carefully selecting the right type of furniture. We then left her to carry on and bring the whole thing to life. Our new offices have created just the right environment for our team here at Thatchers. We have been delighted with the results and the proof is that people are preferring to come and work in the office than to work from home.” 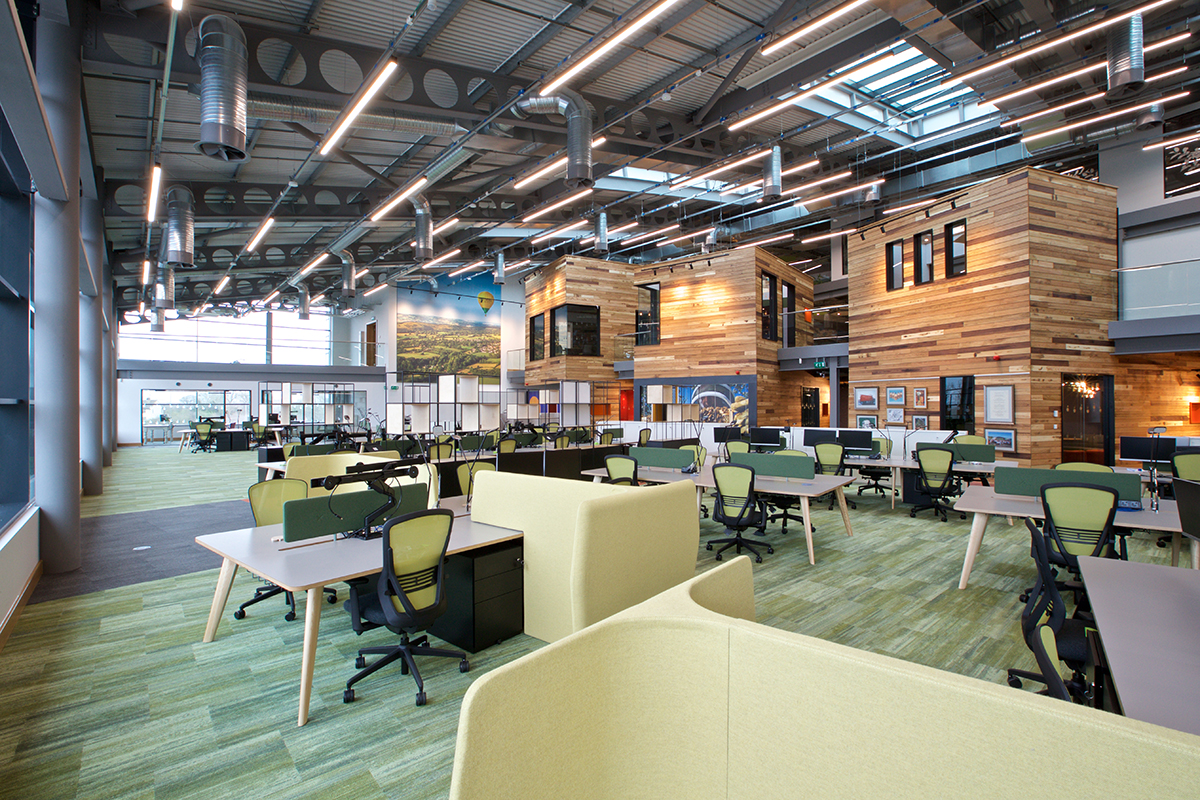 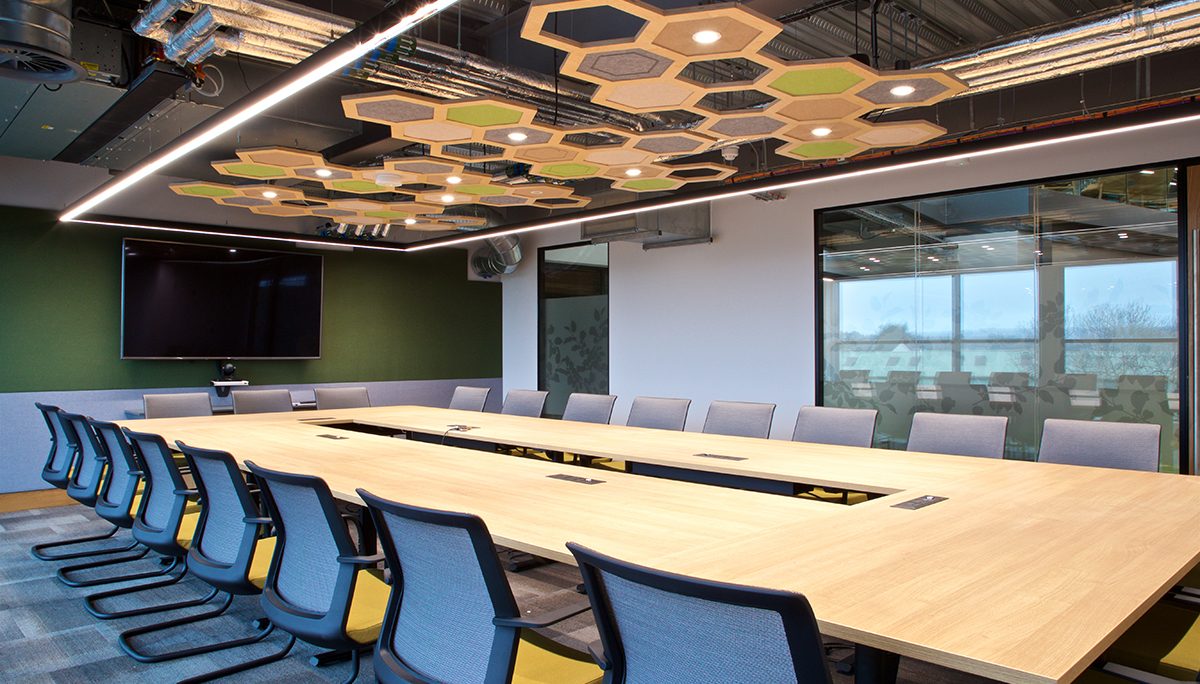 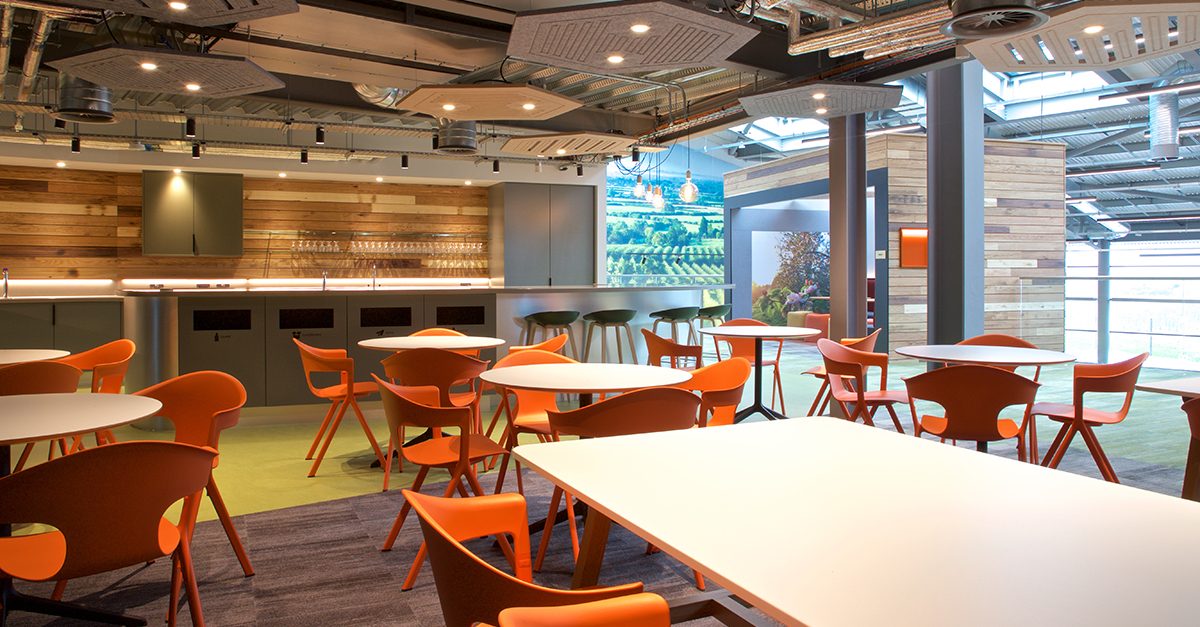 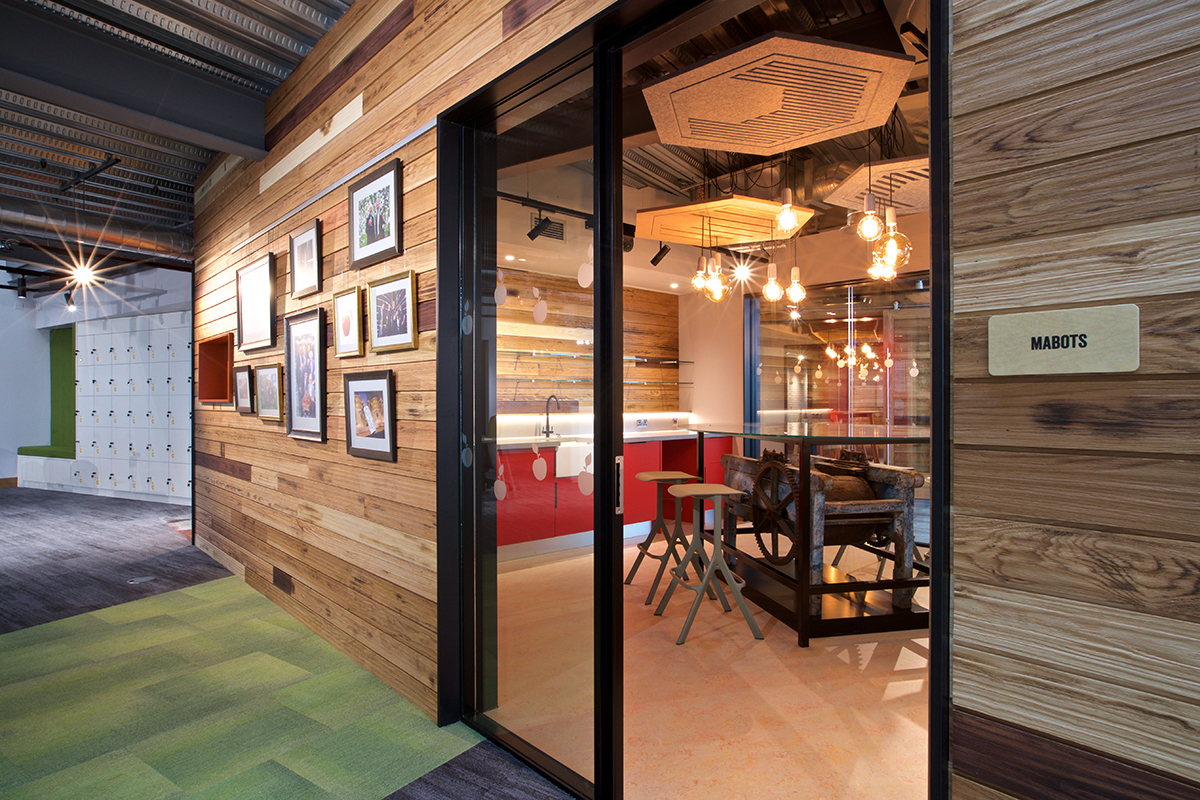 Myrtle Farm, in Somerset, has been home to Thatchers Cider Company for over 100 years. In that time the company has grown and evolved, with Thatchers staff in separate buildings across the site.

Wylde were appointed by Thatchers to design the inside space of the new HQ, perched two floors up in a brand-new distribution centre. This new building created an opportunity to bring all the departments together in one office space.

The brief was simply to accommodate seventy desks for a staff-only environment, with a more flexible space to cater periodically for an eighty strong sales team, meeting rooms, and a large conference room and ante area for one hundred staff.

Unlike most projects we work on, the building only existed on paper at the start of the concept design process. Initially Wylde were appointed to come up with a vision of how to use the space, and as part of this conceptual stage the Thatchers’ team chose the most ambitious and daring idea to develop. The concept was a series of three-dimensional boxes rising through the tallest part of the building, which would house various open and closed meeting spaces, whilst linking the three floors together. 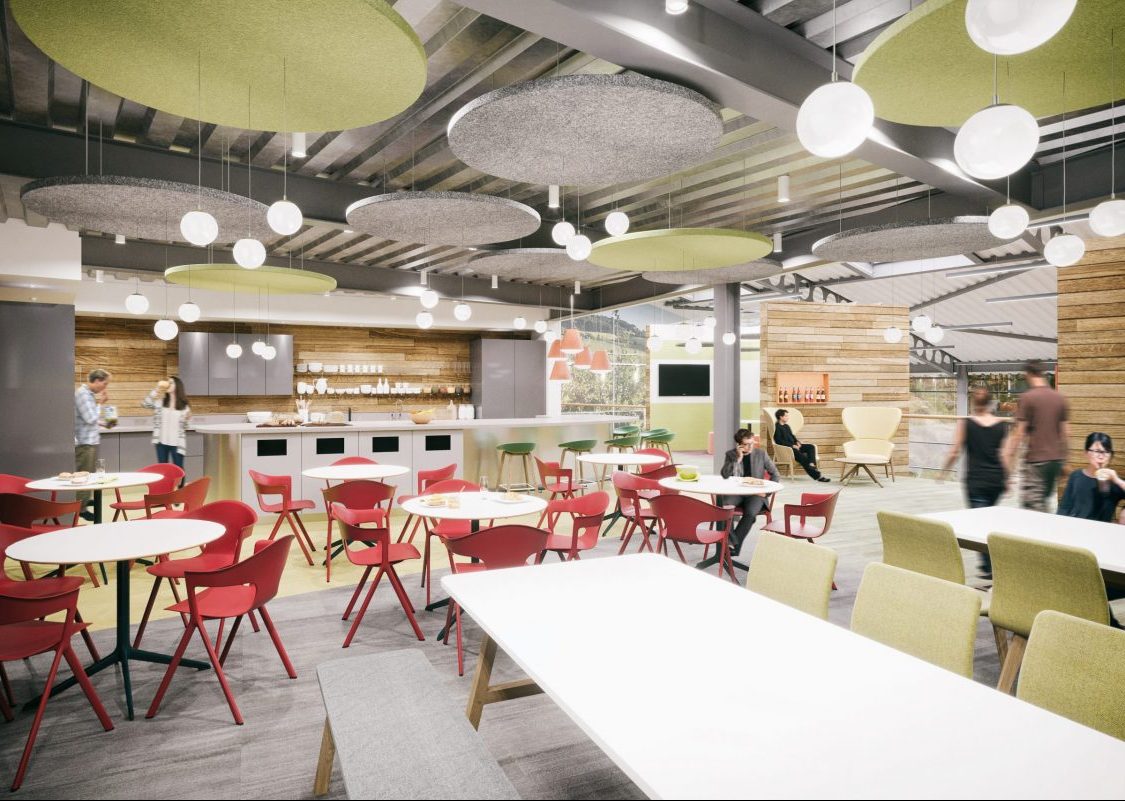 On entering the building, the dramatic bespoke staircase winds up in front of you, wrapping around a single inclined five storey steel column. The initial concept was inspired by apple peel unravelling. The landings gradually twist around and recede towards the entrance to each floor. The theme continues at each level with a custom apple pattern stamped into perforated metal balustrade panels.

Wylde used materials, colours, finishes and imagery inside the space to recall Thatchers’ family heritage. Soft natural colours and materials that bring the outside in, are aimed at reminding staff of the core business of apple processing and orchards. They provide a holistic feel to modern office life.

The timber clad meeting pods are reminiscent of farm buildings. Set at different angles in the space, and clad in four different timbers, they create dramatic vistas across the building and surrounding countryside. Carefully placed glazed sections frame views in multi directions. The overall effect is truly outstanding. 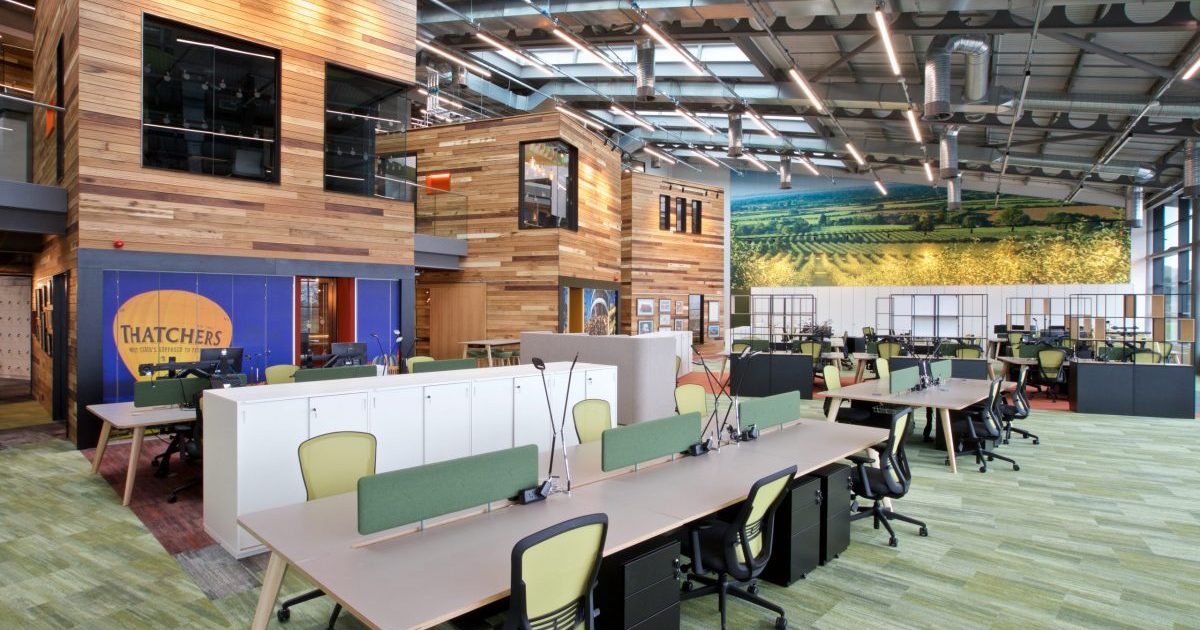 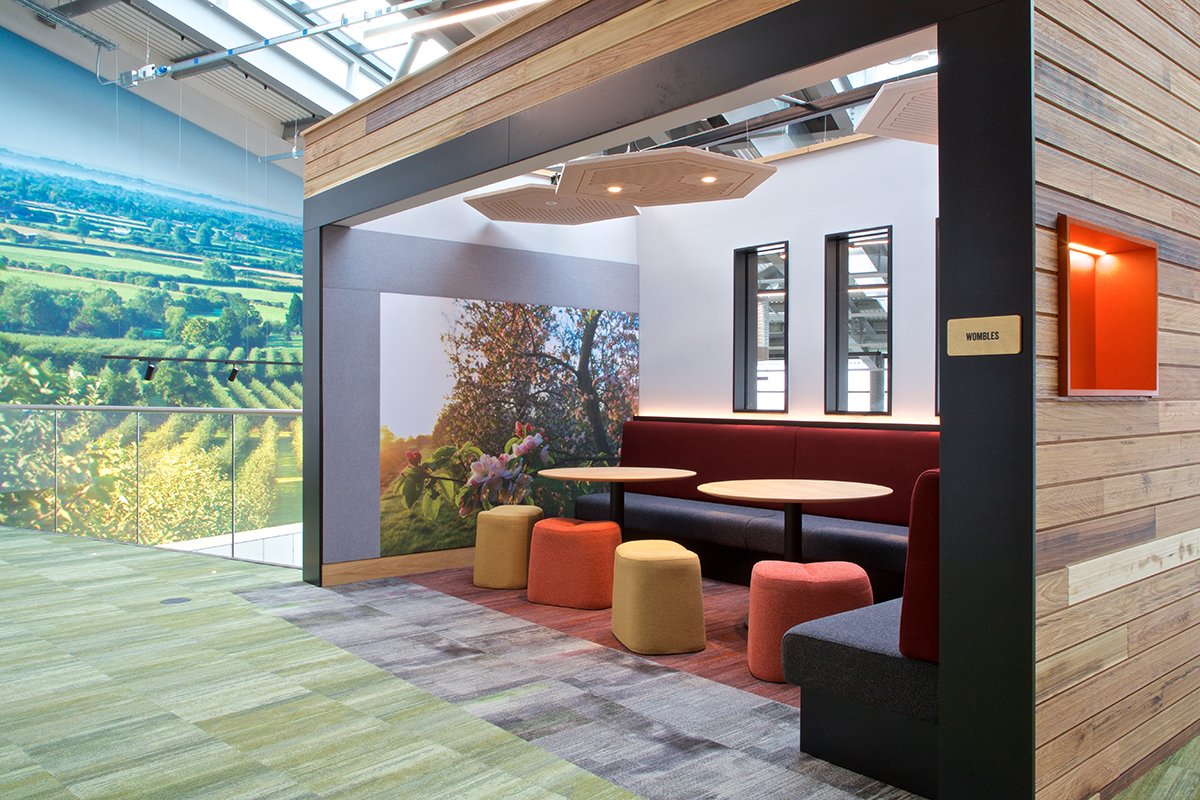 Thatchers photography and branding is subtly integrated in all areas, together with historic family photos and images of cider production across generations.
High quality furniture and fabrics have been selected to tie in with the overall branding theme which is unified by the complementary colour palette that continues the theme of apples, orchards and fields.

The management team were committed to providing staff with ergonomic work settings. Old furniture in numerous locations across the site was abandoned in favour of modern products that clearly sit in a modern world.

Each element of the interior has been carefully considered and integrated into an overall cohesive design. Task lights at every desk that gives each user control over their own light levels. Numerous breakout areas allow staff to meet, work individually or just relax and think. Hotel quality toilet facilities complete the design.

Check out the Thatchers Farmhouse Project!

BACK TO OUR WORK